Alumni, their professors, deans, and current students marked in November the 10 anniversary of the start of the Yonsei Graduate School of Business’ executive MBA program that in a decade has climbed into the top 40 of such programs in the world, according to current rankings by the Financial Times.

The first session of the homecoming and anniversary celebration consisted of a ceremony and dinner. The second session featured stories of EMBA alumni and current students over the past ten years. The two sessions were led, respectively, by Professor Young-Chan Kim, director of the tenth EMBA class, and Tae Kyung Kim, secretary of the EMBA alumni association.

Starting with the welcoming remarks, the first session focused on the EMBA's history and the vision for its future vision. That history was both fresh and special to YSB Dean Kil-Soo Suh, who as associate dean ten years ago designed the program himself and oversaw its successful launch. He welcomed the participants, saying, "We prepared this event because we wanted to mark the tenth anniversary and make the program move further forward." He recalled that the program, as a latecomer, faced many concerns when it was launched.

"But having been growing and developing for ten years,” he continued, “it has become the best program in the country.” He attributed the driving force behind its growth and success came from the support of the "eldest brothers," the first graduates of the program. Also, he said, "thanks to the strong support of EMBA, we were able to build such a grand business building," further expressing his gratitude for the consistent support of alumni. 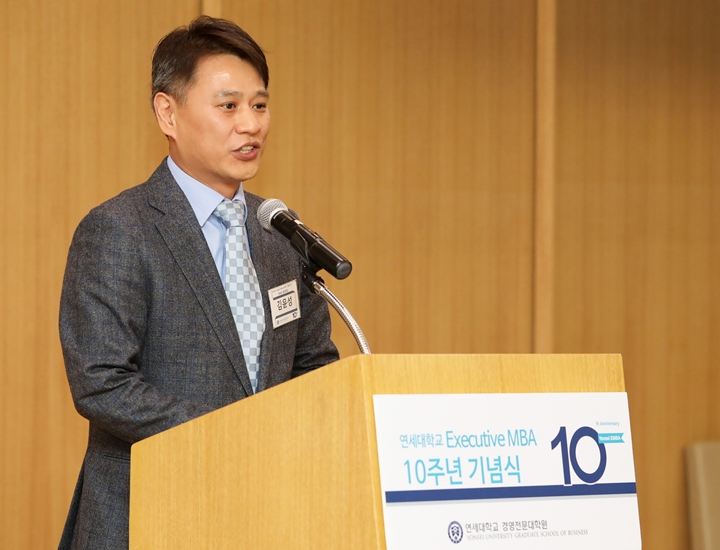 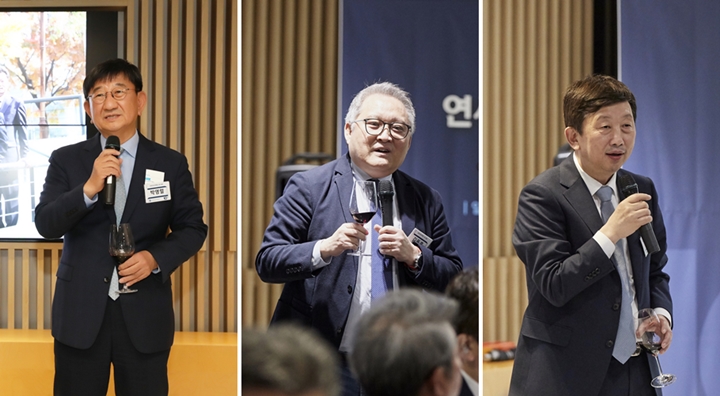 Soon Hong Min, associate dean of the Graduate School of Business, summarized the program’s history since its launch October 21, 2009, with the admission of the first class. So far, 305 alumni have graduated, and 71 students are currently enrolled. Then, Dean Suh presented the school’s vision of having the EMBA program ranked among global top 30 in the Financial Times by 2025.

After the dinner, Tae Kyung Kim, president of the EMBA alumni association, chaired a session in which all alumni and students from the first to the tenth class, starting with Min Suk Kang (first class of the program), introduced themselves to the audience. During the session, the EMBA alumni mentioned that they have been holding regular monthly gatherings since graduation to maintain their close bonds and communication. 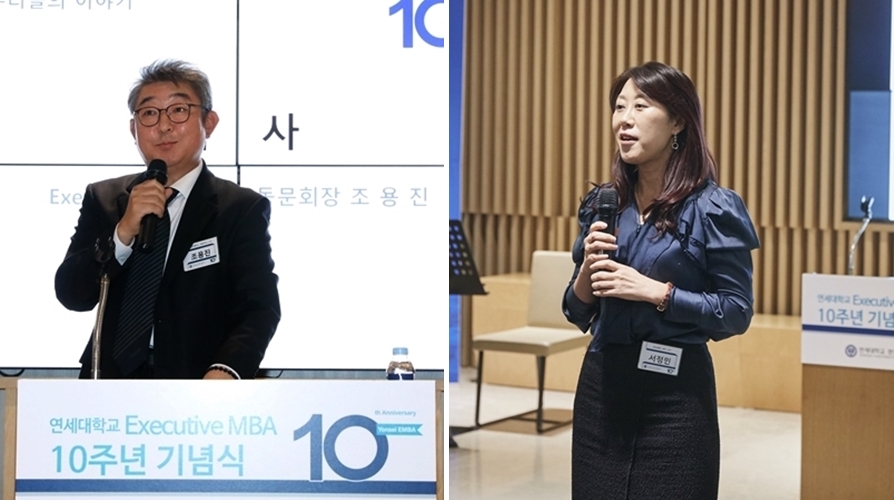 The session was followed by speeches from the former presidents of the alumni association. Yong Jin Cho, the first-generation president, said, "I would like to thank our classmates, juniors, current students, and Dean Kil-Soo Suh for providing us this occasion today. " He said, "I have endeavored to create an alumni association that serves the nation and society, pursues new knowledge, communicates with the school, and strengthens the bonds between alumni." He added, "I hope alumni will care about and maintain close ties with the alumni association and with each other in the future." 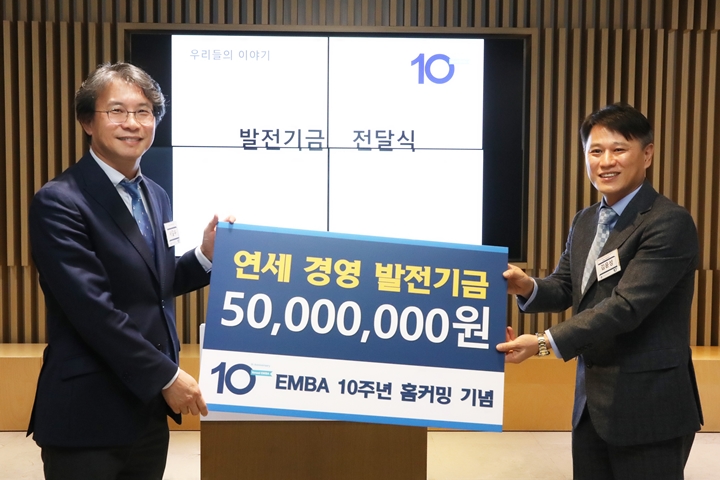 Lastly, Younsung Kim, current president of the EMBA alumni association, handed over a 50 million won development fund to Dean Suh, who after expression his gratitude for the gift, then thanked the professors for their hard work as directors of each EMBA class and said he is proud of the EMBA program’s great achievements in such a short time. He also thanked everyone who prepared for and participated in the EMBA homecoming event. 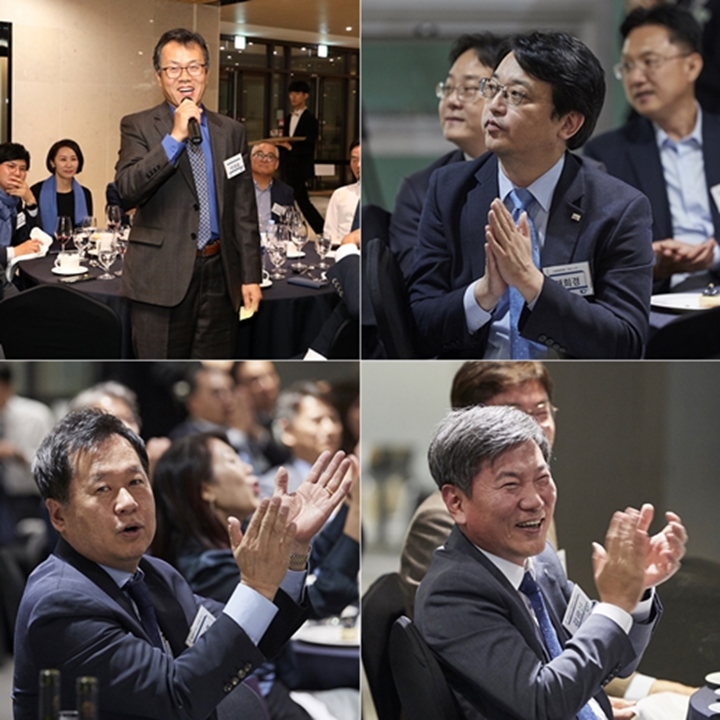 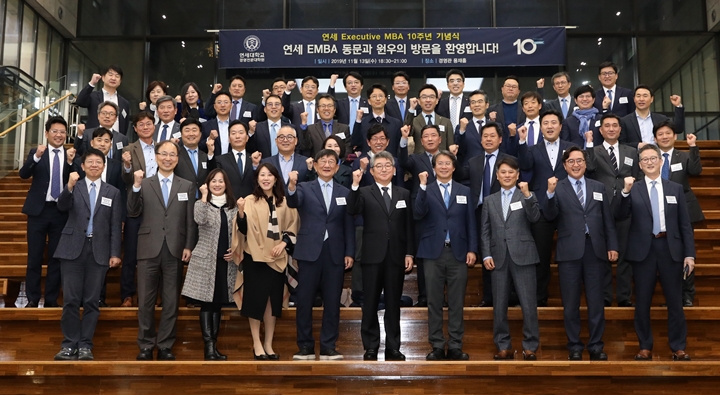 List
Prev Yonsei MBA, the Only One in South Korea Featured in the Two Most Recognized Global Rankings
2020-03-02
Next Professor Jee Hong Kim Becomes Professor Emeritus After 31 Years of Service.
2020-03-02