A YSB student team’s third-place finish in November at the Carlson International Human Resources Case Competition (CIHIRCom), hosted by the Carlson School of Management of the University of Minnesota, put Yonsei on the map as the first team from a non-English speaking country to receive an award in this competition. 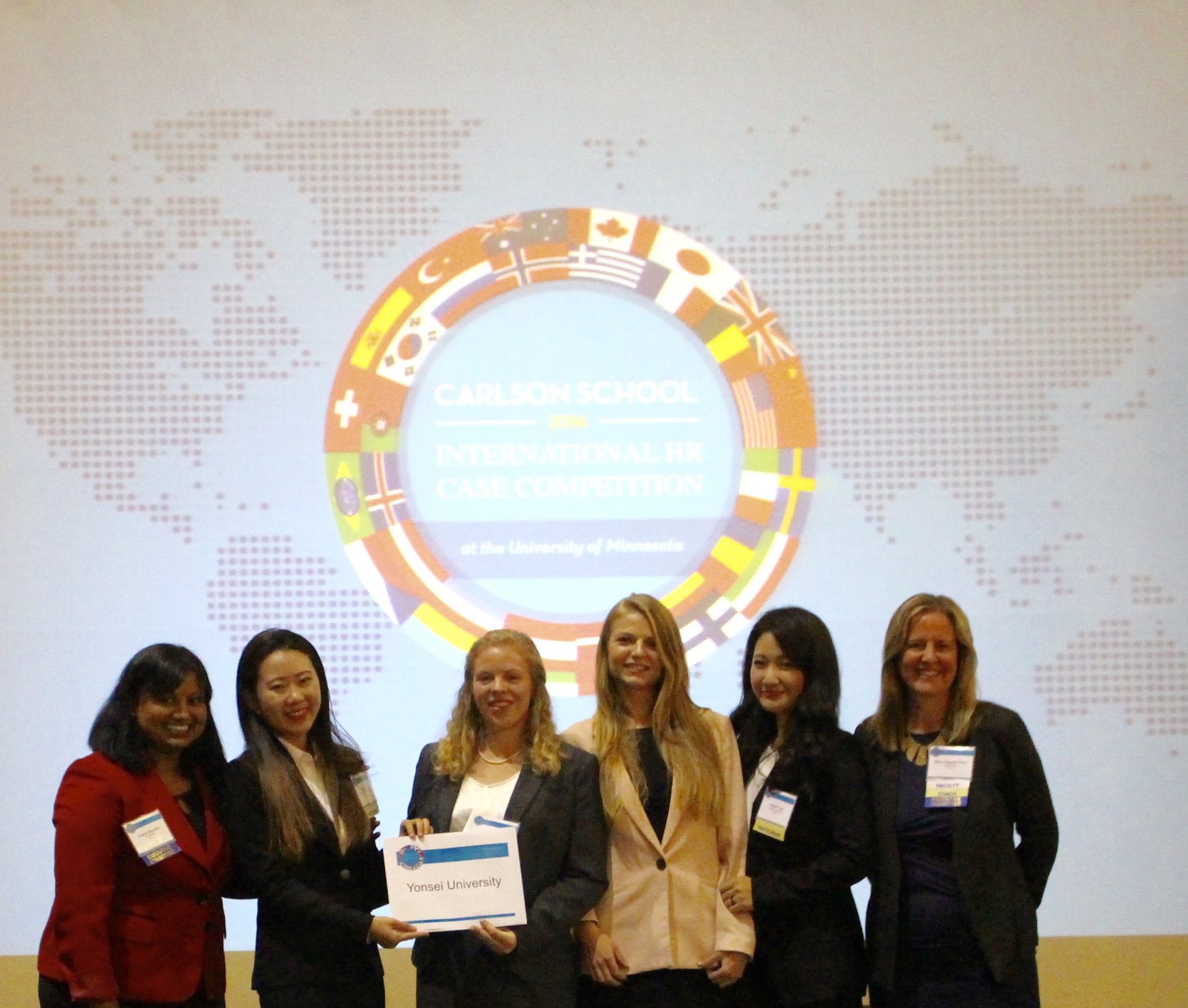 CIHRCom is the only international human resources case competition, and students from universities around the globe with specialized programs in human resources management participate in the competition. The participating students not only need to have a general understanding of HR but also the ability to think quickly and creatively because they are assigned a case and have limited time, usually from 9 a.m. to 12 midnight, to come up with and present a corresponding solution. 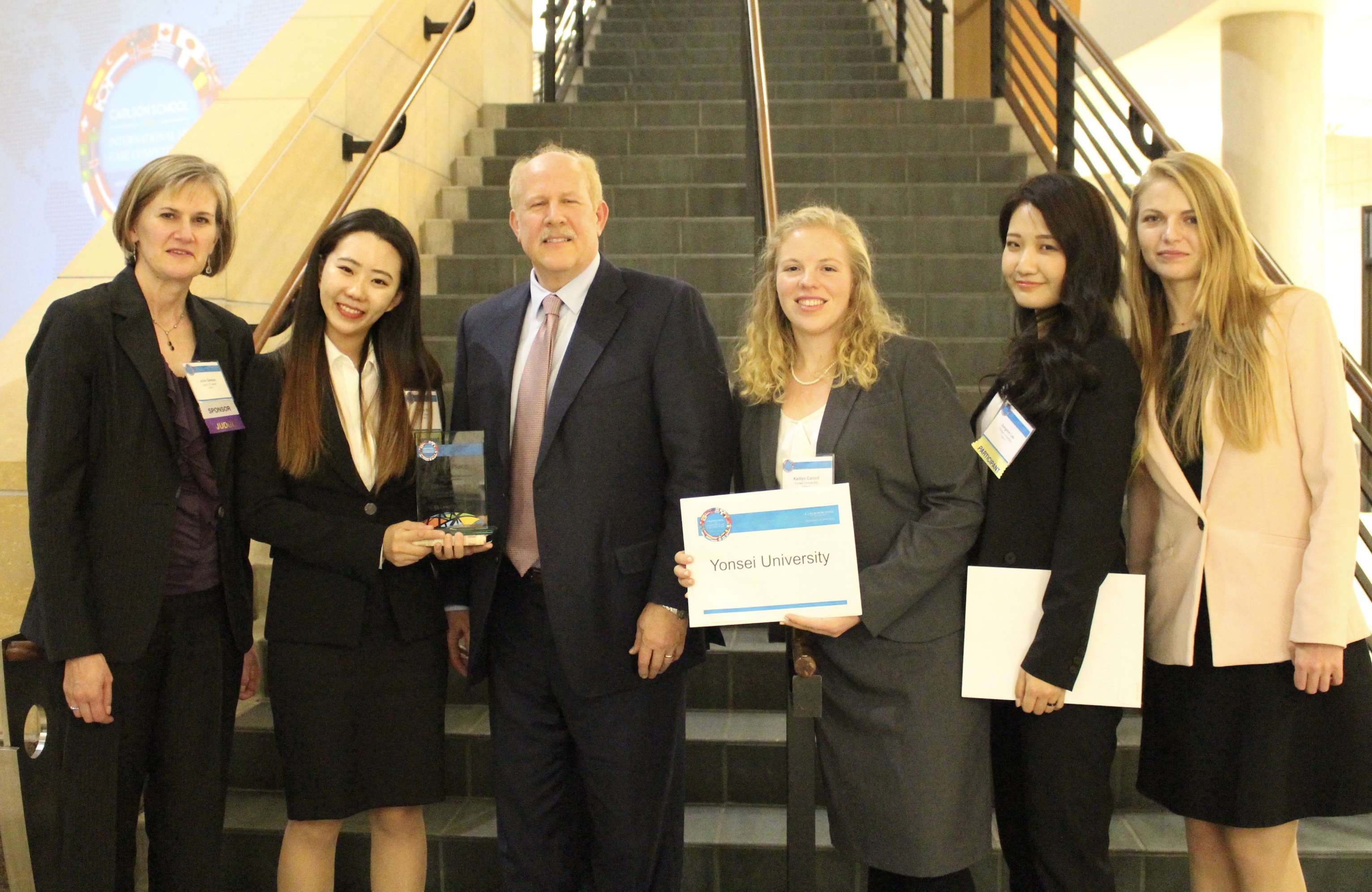 This year’s competition gathered students from about 30 nations online and screened them on blind test results until only six teams were left to enter the finals.

"The mentoring professors only have one hour designated to give guidance to students during a period allocated in the middle of the competition to help frame a solution. Hence, it is critical for students to have fluent English communication skills as well a teamwork,” said Professor Hyuckseung Yang of Management, who supervised the students in entering the competition. This year’s competitors were assigned a case for Land O’ Lakes, one of America's premier food companies, and were asked to present an onboarding program for Land O’ Lakes’ global employees.

“At the outset, I would like to thank Professor Hyuckseung Yang of Management and Professor Hyun Tak Roh of Management for their passionate guidance through preparations for preliminary rounds to the finals,” Team Leader Hyeonseon Park said, commenting on their historic finish in the competition. “Our performance was effective thanks to each team member contributing by doing what they do best and communicating through sharing what we’ve learned from the presentation process.”

Despite the fact that YSB team had only one student, Hyeonseon Park, studying HR for a career, and that each team member prepared for the competition while taking on academic and work-related burdens, they were able to overcome obstacles and enhance their teamwork by meeting together and having discussions. Moreover, having members from diverse backgrounds such as Kaitlyn Carroll from the United States and Eliska Uhlirova from The Czech Republic allowed the team to approach the agenda from various perspectives and come up with ideas that drew admiration for being fresh and creative.

“We had a very short time to prepare because this year’s case was given on the day of the competition,” Eliska Uhlirova said. She recalled that “it was difficult to research so many topics in so little time because no one knew what case would be given, making it somewhat hazy.”

“The competition opened my eyes to the prospects of HR as I realized that there are multiple approaches to enhancing HR systems in practice,” Jeongmin Lee said. “It was a great learning experience because, unlike other HR case competitions, foreign students with various career experiences and backgrounds are allowed to participate in the competition.”

“There were many teams superior in terms of work experience and professionalism but YSB team’s achievement owes to each member’s commitment and hardworking spirit,” Kaitlyn Carroll said. “I hope our team’s success will motivate other Yonsei colleagues as well.”