Professor Dae-Ryun Chang of Marketing is also a film director. He says the two roles have more in common that first meets the eye and have synergistic effects.

Q> I wonder why you became a movie director.

A> I think everyone has hidden talents or special interests. I have been interested in movies since I was young, especially when I was in college, and movies were more memorable than the management course I majored in. Fourteen years ago, I was having a research vacation at Columbia University and took short courses at the New York Film Academy (NYFA). I learned the theory of movies, the terminology, and the technical ways of filming and editing, and I was able to produce a two-minute film with my own screenplay. A lot of people must work together to make a movie, and I thought that my major in business administration was similar. I learned a little more about movies than the average person, and then I completely gave up the idea of movie making.

But five years ago, when I was teaching an executive training program for six months in the European Union, I met Aurelien Lane who is professionally involved with movie making. I happened to talk to him about movies, and my dream of acting was revived. He asked me to show him the script I wanted to produce, so I sent him a script in Plan B on NYFA. Aurelien was a very straightforward person in class, and he didn't expect much, but he said the story was very interesting. He also offered to produce my first work, I, Profess. Through him, I was introduced to the film director, Daniel Smukalla, the main character actor Min Jung-ki, a South African editor, a Swedish composer, and they mostly volunteered for this. The movie was only eight minutes long, but I was able to debut the film thanks to the efforts of many multinational and hardworking people. The budgets for the films I made later were still small, but all actors and staffs in them have been paid.

Q> Where do you get your inspiration for the movie?

A> In the past, directors of Nouvelle Vague like Truffaut and Godard in France, and recently I like Paul Thomas Anderson, Noah Baumbach, etc.

I'm still a toddler as a movie director, but the writer's theory that they represent is attractive, so I write the script myself and work also as a director. I think sociality is important because the theme of the movie is to win sympathy from viewers. I think all the four themes that I've produced so far are stories that I want to communicate with others extensively in the hope they  help change something in our society.

Q> I wonder what four movie stories you have made so far and what festivals did you participate in? 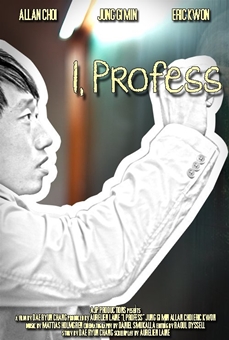 A> The first piece is called I, Profess, and it's about a new professor who suffers from stage fright. The film was a semifinalist at the Calcutta International Culture, India.

My second film was Call Coho, which covers proxy driving and won five awards at the Los Angeles Indie Film Festival as the best foreign short film and as Best Actor in the I Filmmaker Festival in Spain. It's available on Amazon Prime and at the Asian Short Stories site, Viddsee.com.

The third is a romantic comedy, The First Timer, which deals with the so-called "grooming" of Korean men who use makeup. It was filmed by the Singapore Management University (SMU), which arranged funding. In addition, we created a management case on this topic at the same time, and it is currently being circulated in Harvard Business Publishing under the titleNo More Uncle (“Nomu” is a made-up Korean word for men who use makeup). The film won the Best International Director award at the Portland Comedy Film Festival. 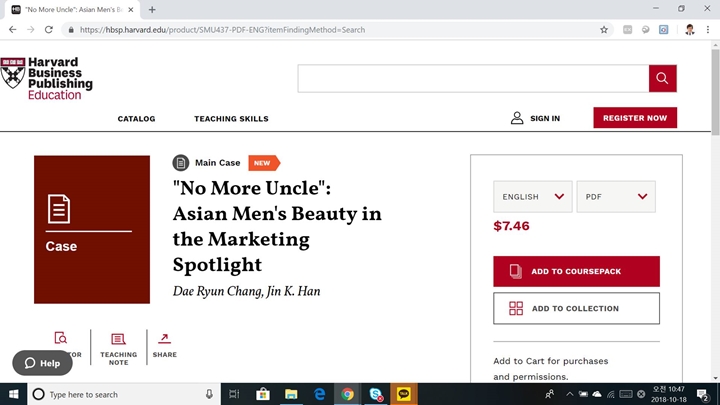 The fourth one is still being edited, and it's called We Can Dream, which is about a social company called We Can Dream that employs people who are intellectually disabled to make organic cookies. The company is operated by nuns from the Korea Sisters of St. Paul of Chartres. I am trying through this movie to dispel the prejudices that ordinary people have about disabled people. Based on the film, we are currently conducting academic research into how video stimuli affect consumers' perceptions, emotions, empathy and intent, as compared to text and audio stimuli, and we have already published some results with the Korea Marketing Association. I'm looking for a link so that I can benefit from my research and lecture activities.

Q> What is your favorite movie?

A> There is a movie that I always show to my students or members of the MARP club during my marketing class. It's called Tucker, and the director was Francis Ford Coppola. The movie has never been a box office success in the U.S., but it has a lot of marketing implications and a great story. The main character of the movie, based on a true story, exclaims at the end, 'Don't give up on your dream.' I've been trying to convey that message to young students who are new to marketing for more than 30 years, but actually I am the one who has been brainwashed by watching it dozens of times, leading to actual production of a movie.

Q> What is the synergy of having two jobs as a professor and a movie director at the same time?

A> My main job is a professor, and I don't have any big credits as a movie director, so I don't deserve to say that it’s still a job. But I quickly concluded from the four movies is that the two jobs are not as different as I thought. Because I am a professor of business administration, I have many advantages in making movies.

Filming is a kind of project management, so you must plan your time and budget like a research project and keep up with your schedule. Financing is very important, and when the movie is finished, I will have to do my best in marketing and promotion. I'm going to take care of the actors and staff. Actors must explain their characters well for actors to understand their roles, rehearse to guide their interactions, and resolve any differences between the staff. So, movies are all about production, finance, marketing, and personnel management.

What I learned in the movies is the importance of detail. There's nothing I can accidentally put into the gestures, the costumes, the props and so on. Such sophistication is very helpful in research and teaching. I used to think a lecture is a performance. The way you deliver your acting is not just verbal, but you have to control your tones with facial expressions and finger movements. I don't act, but I learned a lot about my transmission skills based on the delivery methods I have asked actors to deliver.

I am convinced that I have not been as afraid to stand in front of the camera for several hours as I was in the opening of seven classes in Coursera over the past two years, and that I have been enjoying the experience at the same time because of my work in movie production